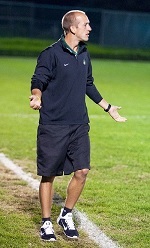 Schauls led the Titans to the second consecutice CCIW Tournament appearance of his career in 2017. The Titans had their best record thus far under Schauls at 11-6-1 that same season.

In 2013 Schauls was an assistant coach at the University of Rochester with a team that finished 15-3-2, went 10-0-1 at home, won the University Athletic Association championship and lost 1-0 to Montclair State in the round of 16 of the NCAA Division III tournament.

From 2010 to 2012 Schauls was an assistant at Western Michigan, where teams were a combined 27-26-7 and were regular contenders at the top of the Mid-American Conference. The WMU 2012 team posted an 11-6-2 record, spent 12 straight weeks in the top 10 of the NSCAA Great Lakes Regional rankings, and received votes for the national top 25 for three weeks during the season.

Schauls worked closely with the Bronco goalkeeping unit, which posted a .91 GAA on the season, the Broncos’ lowest mark since 1989. His other responsibilities included overseeing the areas of compliance, recruiting, travel, academics, equipment, video analysis, camps, community outreach, and scouting.

In 2011, WMU made its second straight appearance in the Mid-American Conference championship game as the Broncos ousted defending national champion Akron in the semifinals. WMU also posted a signature regular-season win over in-state rival Michigan, beating the Wolverines for the first time ever in Ann Arbor.

Schauls’ previous coaching experience includes four seasons (2007-10) as the varsity assistant at West High School in Waterloo, Iowa, where he participated in all phases of coaching and specialized in goalkeeper instruction and training. West High produced an all-conference goalkeeper in both 2008 and 2009, and Schauls was a member of the 2009 Mississippi Valley Conference Coaching Staff of the Year. He has also coached at the No. 1 Soccer Camps in Fulton, Mo., and Kenosha, Wis. Additionally, he founded the Cedar Valley Goalkeeper Camp for youth goalies in Waterloo, Iowa.

At Wartburg, Schauls was a goalkeeper and a member of three consecutive NCAA Division III Tournament qualifying teams. He was also an Iowa Intercollegiate Athletic Conference Academic All-Conference selection in his senior season.

Schauls earned a bachelor’s degree in physical education from Wartburg in 2010 and a master’s degree in sport management from Western Michigan in 2012. He has earned both the National Coaching Diploma and National Goalkeeping Diploma from the NSCAA. 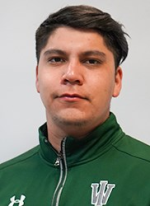 The 2020 season marks the first as an assistant coach at Illinois Wesleyan for Gabriel Carreno.

Most recently, he helped HCC to a Mid-West Athletic Conference Co-Championship on the women's side and a regional finals appearances with the men. Prior to his time with the Hawks, Carreno was an assistant at Otero Junior College from 2017-19. During that time, he served as the staff's head of recruiting operations, helped guide the team to a Region IX Championship (2017) and a top-20 team academic ranking.

In addition to his posts at Otero JC and Heartland, Carreno coached the El Paso Premier Panthers and helped form the Rush and FC Dallas branches. He created his own club, the EP Legacy Soccer Club, which under his tutelage saw players play at all collegiate levels from NJCAA to NCAA Division I.

Carreno graduated from the University of Texas at El Paso with a bachelors degree in multi concentration studies in kinesiology, health nutrition, and biology. While at UTEP, he played in the National Intramural Recreational Sports League and was a three-time national tournament participant.

Professionally, Carreno played in the North American Soccer League. He also played semi-professionally in the Premier Development League, now USL League 2, for the Albuquerque Sol, and played in Mexico for La Tribu.

Natalie Freeman joined the Illinois Wesleyan women’s soccer coaching staff prior to the 2019 season. She works primarily with the Titans’ goalkeepers.

Freeman graduated from Southern Illinois University-Edwardsville with a bachelor’s degree in psychology, emphasizing in sports psychology in the spring of 2019. A three-year letterwinner in goal for the SIUe women’s soccer team, she served as a student assistant coach during the 2018 season.

Freeman brings several years of experience, having coached at the youth, high school, and collegiate levels.

The Normal, Ill. native holds US Soccer Federation National D and Grassroots licenses, as well as a Goalkeeper Level 3 license from the United Soccer Coaches Association.